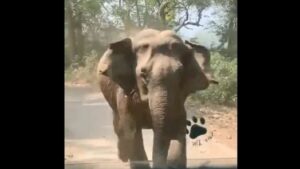 Occupants of the vehicle were excited initially but became terrified a moment later after the charging elephant got close to their vehicle.

The video which is both scary and intriguing was recently posted on Twitter. The clip captured the incident where an elephant charged towards a bus.

The video was posted on Twitter by IFS officer Surender Mehra. He also tagged two other IFS officers, Susanta Nanda and Parveen Kaswan, on his post.

“Always be cautious and keep a safe distance from #WildAnimals , especially in #elephant area,” he wrote while posting the video. “Even if you are in a closed vehicle,” he also added.

The clip opens to show a bus standing on a road passing through a jungle. The video, taken from inside the vehicle, shows an elephant standing at a distance from the bus. The animal then starts running towards the vehicle at which point the driver starts reversing the bus. However, the tusker closes the distance fast and comes dangerously close to the bus. Then it stops and changes its direction to face the jungle.

Always be cautious and keep a safe distance from #WildAnimals , especially in #elephant area..🐘
Even if you are in a closed vehicle..@susantananda3 @ParveenKaswan pic.twitter.com/ghjpYm26Ak

This is not only the weird video trending online. There’s also a hair-raising video showing a Indonesian man dancing with two giant snakes on his shoulders and another shocking video showing a man kissing a king cobra on the head.

Saxon is a prolific writer with passion for the unusual. I believe the bizarre world is always exciting so keeping you up to date with such stories is my pleasure
Previous Watch Shocking Video As Man Tries To Kiss King Cobra On Head
Next Watch Intriguing Video of Crocodile Sneaking Up On Deer