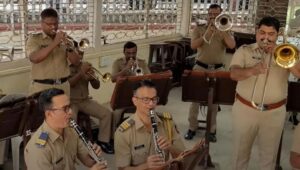 You will definitely watch this till the end if you know the tune this police band played. Internet is loving this video.

The Mumbai Police band, ‘Khaki Studio’, recently surprised the social media users with its outstanding rendition of Srivalli from the film Pushpa: The Rise. The band is garnering praise for its yet another melodious performance. The band on Monday released the cover of the famous Egyptian song ‘Ya Mustafa’ on its YouTube channel Khakhi Studio.

The description in the video says, “Ya Mustafa is a well-known multilingual song from Egypt, composed by famous Egyptian musician Mohamed Fawzi, to feature in an Egyptian movie, and which has then been recorded in many different languages for its unique and catchy tunes.Several different versions, including parodies, have been recorded. The song first became popular in Europe with the help of singer Bob Azzam, who released it in 1960 in France.”

Saxon is a prolific writer with passion for the unusual. I believe the bizarre world is always exciting so keeping you up to date with such stories is my pleasure
Previous Viral Video: Bride slaps groom during wedding ceremony in Uttar Pradesh
Next Wild rabbit raids the garden section at Colorado Walmart store (Video)