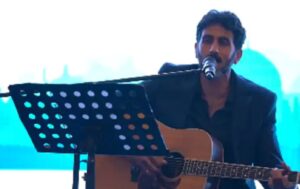 Anyone who has watched the popular Israeli series Fauda, will definitely remember actor Tsahi Halevi.

A video featuring this Tsahi has gone crazy viral on social media for very good reasons.

The actor was in New Delhi on the occasion of the 74th Independence Day of Israel. He was present at an event organised by the Embassy of Israel in India. Tsahi took everyone by surprise when he sang the song Tere Jaisa Yaar Kahan at the event.

The Israeli actor also crooned the song Tamally Maak along with this Kishore Kumar hit number. While singing, he also played the tune on the guitar.

“We are celebrating 30 years of friendship, so I thought the song will be relevant,” Tsahi said before he began singing this song.

The actor visited India for the first time to commemorate 30 years of India-Israel diplomatic relations.

Saxon is a prolific writer with passion for the unusual. I believe the bizarre world is always exciting so keeping you up to date with such stories is my pleasure
Previous Wild rabbit raids the garden section at Colorado Walmart store (Video)
Next Watch! Brawl Breaks Out On Flight, Passengers Throw Punches At Each Other (Video)