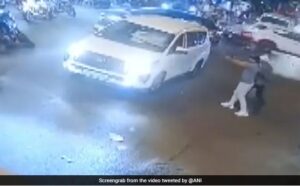 This is a jaw-dropping video footage of shooting that took place in Delhi, India, which has gone viral on social media.

Two brothers were injured after three shooters surrounded their car on a busy road in west Delhi’s Subhash Nagar last evening and fired at least 10 rounds.

Shocking CCTV footage shows passers-by looking on dumbfounded as the car is fired at and then chased by the attackers, firearms in their hands.

The targets have been identified as Ajay Choudhary, former chairman of Keshopur mandi and his brother Jassa Chaudhary.

Reports have it that the two brothers were taken to a hospital and their condition is said to be critical.

Police have already commenced investigations to identify the shooters from the footage of CCTV cameras in the area.

According to a police officer, Mr Chaudhary lives with his family in Tihar village. Last evening, he and his brother were on their way to a hospital to meet a relative. When they reached the busy Subhash Nagar intersection, three shooters opened fire at the car.

A one-minute video shared by news agency ANI shows the busy Subhash Nagar neighbourhood during peak traffic hours. A white car is seen stuck in the middle of the road as two shooters point their guns at the occupants.

Shocked by the sight of the attackers wielding guns, passers-by, bikers and e-rickshaw operators are seen fleeing to safety. Traffic comes to a standstill as cars stop far behind the white car being fired at. Some cars are also seen making an about turn and leaving the area. 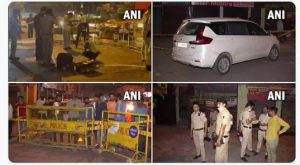 The footage also shows the three shooters who keep firing at the car until the vehicle lunges forward and moves out of the camera frame. The shooters chase it, gun in hand. Possibly due to an obstruction ahead, the car then reverses back to its earlier spot, takes a quick turn and speeds away. The shooters are seen trying to chase it down as others on the road look on in shock.

According to police, the shooters fled the spot after the incident. Local residents informed Mr Chaudhary’s family members and the brothers were rushed to the hospital.

Senior police officer Ghanshyam Bansal said they are scanning CCTV footage to identify the shooters and track them down. Several teams, he said, are working on this.

After a while police could be seen at the crime scene as investigations commenced.

Saxon is a prolific writer with passion for the unusual. I believe the bizarre world is always exciting so keeping you up to date with such stories is my pleasure
Previous Watch: Alligator Tries To Tear Python Into Two During Intense Fight (Viral video)
Next Authorities Close Down Kerala Restaurant After Customer Finds Snake Skin In Food