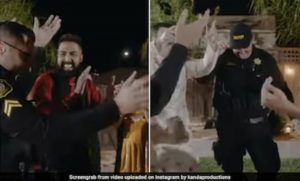 Two deputy sheriffs learnt and displayed new dance moves at Punjabi family’s pre-wedding function after they went their in response to a neighbor’s noise complaint.
The Punjabi family living in California organised a pre-wedding function last month, which saw the two deputies of the Sheriff department knocking on their doors. They visited the house of Manpreet Toor after receiving noise complaints from her neighbours.
The celebrations for the Jaggo ceremony, which were going on with pomp and joy, turned tense. The family members were nervous after seeing the cops.
After a while their fears went away after the two deputies joined the celebrations.
According to ABC10, the incident took place on April 13 in the city of Tracy ahead of the marriage of Toor’s brother Mandiver to his fiancée Raman.
As the night went on, the dance floor stayed busy and music filled the backyard.

“We just sang, we danced, we just partied because we were super excited. The music was really loud because it was an outdoor event,” Manpreet Toor told ABC10.
Kanda Productions, who was working at the wedding, told a local news channel that the party went on well beyond 10pm. That’s when one of the neighbours complained to the police.

Ms Toor and her guests agreed to lower the volume, but on one condition: That the deputies dance with them on one song.

The cops agreed and soon, they were seen grooving to the Punjabi music. A video of their dance was posted by Kanda Productions on Instagram, which has been viewed more than 33,000 times.

“We asked them to dance and then I taught him two moves, ‘turn the doorknob’, ‘turn the lightbulb’, ‘crush the cigarette’ and he got up there and he just did his own thing. He was awesome,” Ms Toor was quoted as saying by ABC10.
The deputies showed the new dance moves he was taught by the hosts. After the policemen’s dance, the guests present there went crazy.

The San Joaquin County Sheriff’s Office also thanked the attendees for their kindness and hospitality in a tweet, adding that homeowners agreed to turn the music down.
It was gathered that the two deputies were invited to the wedding few days after and they showed up.

Saxon is a prolific writer with passion for the unusual. I believe the bizarre world is always exciting so keeping you up to date with such stories is my pleasure
Previous Authorities Close Down Kerala Restaurant After Customer Finds Snake Skin In Food
Next Viral Video: Man Battles 4-Metre-Long Crocodile to Save His Son’s Hat