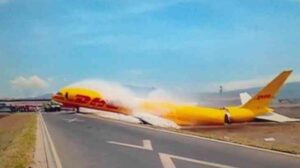 In case you missed this shocking video, you just have to watch it now.

A cargo airliner broke into two half during an emergency landing in Costa Rica earlier last month.

The accident had prompted the temporary closure of the international airport in San Jose.

The footage showed smoke coming out from the bright yellow aircraft of German logistics company DHL as it ground to a stop, having slid off the runway when it spun and broke around the rear wheels.

Two crew members onboard were “in a good condition,” said the chief of Costa Rica’s firefighters, Hector Chaves. 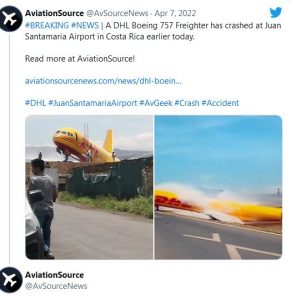 They were taken to hospital as a precautionary measure “for a medical check-up,” as per Guido Vasquez, a Red Cross worker.

The pilot of the aircraft was taken aback but both crew members were conscious and “remember everything vividly,” added Vasquez.

The accident took place just before 10:30 am after the Boeing-757 plane, which had taken off from the Juan Santamaria international airport outside San Jose, was forced to land 25 minutes later due to a mechanical failure.

The crew members apparently had alerted local authorities about a hydraulic issue. The airport was shut until 6:00 pm.

Saxon is a prolific writer with passion for the unusual. I believe the bizarre world is always exciting so keeping you up to date with such stories is my pleasure
Previous Hair Raising Video! Woman Miraculously Survives After Fainting and Falling Under Moving train (Watch)
Next Woman calmly talks on phone as train passes over her, watch hair raising video 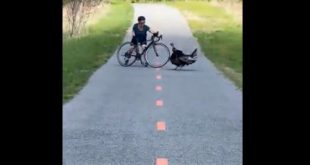