This footage is not for the fainthearted as it looks like something out of a nightmare.

The internet has just been stunned by a viral video showing a house filled with thousands of scorpions.

The video which was shared on Reddit, shows thousands of invertebrates crawling around a house that has been described as “abandoned” in the caption.

There is no indication of the origin of the video or where it was recorded, but the clip has surely given chills up and down internet users’ spines. The post has been upvoted over 33,000 times, with netizens saying the scene is the “stuff of nightmares”. 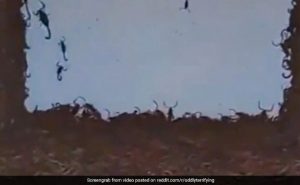 Internet users have explained that the species of scorpion in the video is Tityus Serrulatus, which is native to Brazil. “They are parthenogenic, meaning they can give birth without mating so that will explain their numbers,” another user said. One Redditor even hilarious suggested using ultraviolet light to make the scorpions glow.

Meanwhile, it is to mention that according to Newsweek, scorpions are part of the class Arachnida and are closely related to spiders, mites and ticks. There are around 2,000 species of scorpions, but only 30 to 40 of them have venom strong enough to kill humans.

Citing Mayo Clinic, Newsweek reported that young children and older humans are most susceptible to the effects of scorpion venom and that deaths from the stings are a significant public health problem in areas where access to medical care is limited. The Deathstalker scorpion is described as one of the world’s deadliest scorpions due to a tail full of venom, while the bark scorpion is described as the only domestic species with venom potent enough to cause severe symptoms.

Saxon is a prolific writer with passion for the unusual. I believe the bizarre world is always exciting so keeping you up to date with such stories is my pleasure
Previous Woman calmly talks on phone as train passes over her, watch hair raising video
Next Snake Catcher Rescues 13-Foot-Long King Cobra In Andhra Pradesh