The internet is amazed by the bravery of an Indian police officer who risked his life to save a passenger.

A horrifying video has gone viral on social media showing a railway police personnel putting his life at stake to save a passenger. The entire incident was captured on the CCTV camera installed at the railway station.

In the video, the policeman can be seen rescuing the passenger who was on the railway track when the train was approaching the station.

The video was shared by a Twitter user along with a caption, “A railway police personnel put his own life in danger to save a passenger who was almost hit by a local train at the #Thane station.” 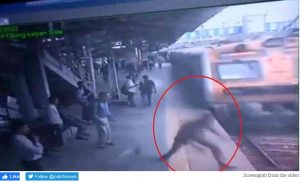 The passenger was carelessly crossing the railway track when the vigilant policeman jumped to save the life of the man.

The police personnel immediately pulled the passenger towards the platform a second before the local train entered the station.

The passenger would get crushed under the wheels of the local train if the on-duty officer didn’t come to rescue him.

After the video went viral on social media, the railway policeman has been receiving a lot of applause for his courageous act.

However, Railway officials have warned passengers several times not to commit such mistakes but people don’t take these rules seriously and put their lives at risk by crossing or walking on railway tracks.

Saxon is a prolific writer with passion for the unusual. I believe the bizarre world is always exciting so keeping you up to date with such stories is my pleasure
Previous Watch! Biden nearly stumbles while boarding Air Force One
Next Video: Forest Officials In Tamil Nadu Rescue Deer From Open Well, Internet Overwhelmed