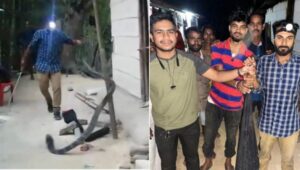 Two environmental enthusiasts were in action in Cacher District, India after they got a call from locals that a snake was hiding in a storeroom of a private house.

Trikal Chakraborty and Nabangkur Das received a distress call from people living in Dargakona area in Cacher district that a venomous snake had hidden in a storeroom of a house near Assam University. When they got to the place they discovered it was a dangerous king cobra.

The two environmental enthusiasts swung into action and the entire rescue operation was captured in a jaw-dropping video.

Chakraborty and Das successfully rescued the cobra after a struggle but expressed their shock at the discovery. “To our shock it was a 13-foot long cobra weighing around 10kg. It was monstrous and this rescue remains a special one,” Chakraborty said.

Saxon is a prolific writer with passion for the unusual. I believe the bizarre world is always exciting so keeping you up to date with such stories is my pleasure
Previous Snake Catcher Rescues 13-Foot-Long King Cobra In Andhra Pradesh
Next Watch! Biden nearly stumbles while boarding Air Force One