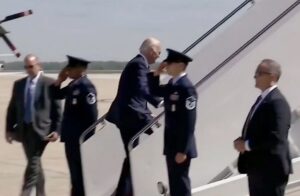 President Joe Biden went viral again over another less than graceful walk up the Air Force One stairway on Wednesday.

A video surfaced online showing Biden, 79, who appeared to momentarily lose his balance as he walked up to the presidential plane at Andrews Airforce Base en route to Illinois. 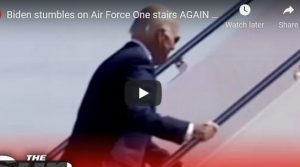 Despite the brief blip, the commander-in-chief boarded the plane without incident, holding the rail with his right hand as he ascended.

The president was in Illinois to visit a farm, where he blamed Russia’s invasion of Ukraine for increased global food prices. He also hosted a Chicago fundraiser and met with union supporters.

Saxon is a prolific writer with passion for the unusual. I believe the bizarre world is always exciting so keeping you up to date with such stories is my pleasure
Previous Watch As Two Men Rescue 13-ft King Cobra from Storeroom in India
Next Railway police personnel in India puts life in danger to save passenger; scary CCTV footage goes viral