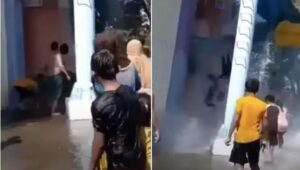 They never knew that this time the waterfall will lead to a ‘fall’ and some of them ended up in the hospital with broken bones.

A terrifying moment was caught on camera in Indonesia’s Kenjeran Park where a huge water slide snapped in half and crashed to the ground.

Daily Star reports that those who were trapped inside the water slide were thrown 30-feet to the ground in front of stunned onlookers.

Horrifying footage of the incident, which happened on May 7, has gone viral on social media. It shows one section of a spiralling enclosed tube slide collapsing and onlookers screaming as swimmers fell to the concrete floor. 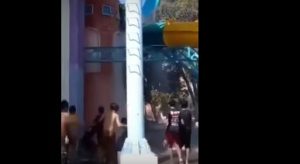 Reports have it that out of 16 people who were trapped inside the slide, eight of them were taken to a nearby hospital, and three of those suffered broken bones, Daily Star reported. The water park, located in Surabaya city, reportedly said that the accident happened because the ride had worn out and weakened over time.

The authorities also admitted that the slide was “overloaded” with people too when the incident took place. The water park informed that the most recent maintenance check happened more than nine months ago.

The incident prompted the deputy mayor of Surabaya city, Armuji, to call for an immediate inspection of other amusement parks in the region as well in order to prevent similar accidents from taking place in the future. As per the media outlet, the deputy mayor reminded the owners of amusement parks to take responsibility and follow necessary safety measures to protect the well-being of their visitors.

Daily Star reported that Mayor Eri Cahyadi, on the other hand, said, “The Surabaya City Government will provide trauma-healing assistance to be carried out by the offices to all victims. They are accompanied until full recovery.”

READ ALSO: Passenger with no idea how to fly airplane safely lands plane after pilot gets sick

Saxon is a prolific writer with passion for the unusual. I believe the bizarre world is always exciting so keeping you up to date with such stories is my pleasure
Previous Watch: People Stop Car With Bare Hands For Woman In FloridaHaving Medical Episode
Next Female University Students Fight Dirty and Expose Their Underwear In lecture hall (Viral video)