The internet is loving this video and the officials involved have been described as amazing.

A footage is going viral on social media which shows forest department officials in Tamil Nadu rescuing a deer from a well.

The video was shared by IAS officer Supriya Sahu on Twitter on Wednesday.

“Safe rescue and release of a Spotted Deer from an open well by the Forest Dept with assistance from the Fire & Rescue personnel. Well done DFO, Tiruvallur and Team. Every life is precious #TNForest #rescue,” she said in her tweet. 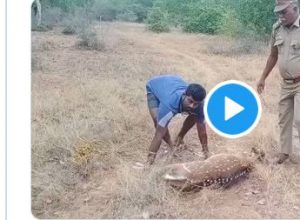 Apart from the rescue video, Ms Sahu also shared pictures of the deer from the well.

Social media users have praised the department for saving the deer’s life in the comment section.
“LAW OF KARMA !!! Keep doing GOOD DEEDS, for others. Your Good Deeds will return, back in some or other form. MANKIND needs to understand it,” a user commented.

“There is still humanity in this world great effort,” a second user wrote.

Saxon is a prolific writer with passion for the unusual. I believe the bizarre world is always exciting so keeping you up to date with such stories is my pleasure
Previous Railway police personnel in India puts life in danger to save passenger; scary CCTV footage goes viral
Next Watch: People Stop Car With Bare Hands For Woman In FloridaHaving Medical Episode