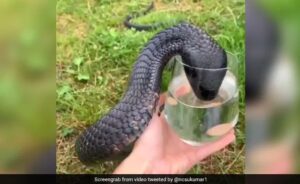 This footage is really terrifying especially when you realize that someone is actually holding a glass cup for a venomous king cobra to drink from. Though the video is a bit old, if missed it then watch it now.

A video of a black cobra snake sipping water from a glass held by a man is going viral on social media.

The king cobra ranks high among the most venomous species of snake on the planet and are native of Southeast Asia.

It is the longest in the cobra species and is very commonly found in India.

The video of the venomous snake was posted by a person in response to IFS officer Susanta Nanda’s Twitter post, which showed a monkey and few ducklings sharing watermelon. “Love to share,” Mr Nanda said in his tweet. 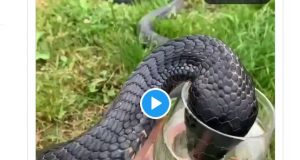 A user named ncsukumar then responded with a video of a cobra drinking water. He captions the video as,
“Monkey and ducklings are eating watermelon and here u are watching the king cobra actually drinking water from a glass held in the hand. They too have to be hydrated then n there. But they don’t open the mouth to drink water there is a small nostril through which they suck water.”

This post has spent sometime online as the user replied to Ms Nanda in August last year but does not remove the intriguing nature of the footage for those who have not watched it.

The video is again going viral since this is the summer season and very few people actually hope to see a thirsty cobra snake.

This particular video has sent chills down the spine of internet users who have viewed it because it is not like videos of other animals drinking water from a glass which you might see every day.

Saxon is a prolific writer with passion for the unusual. I believe the bizarre world is always exciting so keeping you up to date with such stories is my pleasure
Previous Woman hacks off ‘lazy’ husband’s balls with chainsaw then cooks them
Next Viral Video: Woman Closes Plane’s Overhead Cabin With Foot While Carrying Baby In Hand