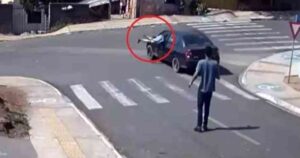 This incident would have been difficult to believe if it were not caught on camera.

A man has shown utmost courage after he tried to stop a car from crashing by jumping into it while it was on the move. This entire incident was captured on CCTV camera.

The video which has since gone viral begins with a woman casually walking down the sidewalk of the empty road.

Just a short while later two men hurriedly run across the road. The next moment, a black sedan appears to roll downhill at a T-point with no one behind the wheel.

One of the passer-by notices how the diverless vehicle was about to crash into someone’s house. This is when he used his quick thinking, ran towards the car and jumped inside the car to pull the handbrake.

With his legs still out of the car’s window, the man is able to bring the car to a halt and save it from a crash. Fortunately, there were no other cars to hit at the junction and everyone visible on the CCTV footage appears to be safe.

The video was first posted to Reddit’s r/BeAmazed group. Many have commended the guy for his quick thinking.

Saxon is a prolific writer with passion for the unusual. I believe the bizarre world is always exciting so keeping you up to date with such stories is my pleasure
Previous Watch As Wild Turkey Attacks Biker In Washington (Video)
Next Watch: Father jumps off cliff to his death while his wife and son were watching and filming (video)