You need to be brave to jog or walk through this pathway otherwise you will be engaged in a battle you did not bargain for.

A fearless wild turkey has been attacking walkers, joggers and bikers on a trail in Washington, D.C., causing a flap.

Several people have reported being chased, slammed into, clawed and pecked in encounters with the big bird on the Anacostia Riverwalk Trail in the northeast section of the district.

The turkey came for musician DeDe Folarin last month as he rode his bike through the area.

“He jumped in the air and he almost clawed my face,” Folarin told local WJLA TV. “He kind of knocked me off the bike and literally chased me around for like five minutes.”

When the turkey took off after another biker, Folarin recorded the confrontation on his cell phone — and then chased the bird off with a stick when the woman under attack called to him for help.

Prince George County Parks and Recreation Department has put up a sign to discourage people from approaching the turkey.

“Some people don’t listen,” Victor Davila of the parks agency told WJLA. “They try to go up to it and take pictures and stuff like that.”

Saxon is a prolific writer with passion for the unusual. I believe the bizarre world is always exciting so keeping you up to date with such stories is my pleasure
Previous Dramatic Video Shows Capture of Escaped Inmate Casey White
Next Man jumps into moving car and saves it from crashing Viral Video) 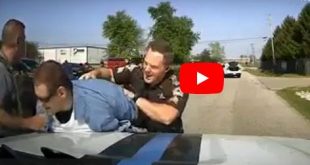