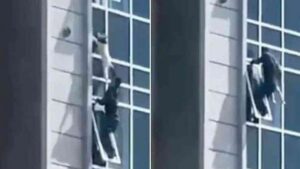 A man has been hailed as a hero after he risked his life to rescue a three-year-old girl from falling from a height of over 100-feet.

The incident took place in Kazakhstan’s Nur-Sultan on Wednesday.

Reports have it that the 3-year-old girl’s mother had gone out for shopping and she used cushions to climb out of the window, after which she was left hanging.

The rescuer, identified as Shontakbaev Sabit was reportedly on his way to office when he noticed a crowd gathered beneath the building watching in horror as the toddler clung to the window ledge.

The footage shows the little girl dangling by the window ledge while the rescuer is seen stepping out of the window – just a floor below her house – and attempting to reach out to the toddler.

The whole video showed the toddler hanging for her life as the rescuer climbed outside, stood on the window below, and urged the child to let go.

The clip also showed the Samaritan pulling the toddler’s leg as the gap between the windows is nearly about three feet. Seconds into the clip, the child is then seen letting go off her grip. Sabit catches the three-year-old in a swift motion and then passes on the child inside the room.

It was reported that after the incident, Kazakhstan’s ministry of emergency situations named the man a hero and awarded him a medal for the speedy rescue which helped save the toddler’s life.

The ministry said that the Subdivisions of the Department of Emergency Situations had sent 7 personnel and 2 vehicles to the scene, but it added that by the time of arrival, it was established that the man had saved the child dangling from the window.

“No one was with the girl, born in 2019. Fortunately, our hero Shontakbaev Sabit, born in 1985, seeing the hanging, crying child, without hesitation and risking his own life, took emergency action and literally caught and saved the little girl’s life in a matter of seconds,” the ministry said.

Saxon is a prolific writer with passion for the unusual. I believe the bizarre world is always exciting so keeping you up to date with such stories is my pleasure
Previous Black couple share their experience with their ‘racist’ neighbor and his son (video)
Next Watch: Man assaults woman lawyer in full public view in India; video goes viral