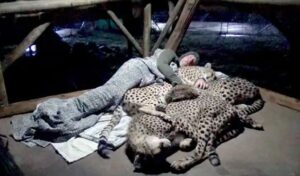 A video showing a man sleeping with three cheetahs at night is going viral on social media.

This video is not very recent as it was originally posted on YouTube by Dolph C Volker in January 2019, but it is again gaining attraction.

Mr. Vokler said in the caption of the video, “I love when I know the answer to a question before it’s asked. Do cheetahs prefer cold concrete or warm blankets and company?”

According to Mr Vokler’s Facebook profile, he is an animal advocate with a Zoology degree and is fascinated by animal behaviour, studying all his life and even planning a cheetah conservation project.

“All are quite tame as they are groomed for the breeding program so when they have cubs, they can be monitored closely. An accepting and approachable mother allows that. There is a plan to release one of these cheetahs into a protected wild in the near future,” he says in the video. 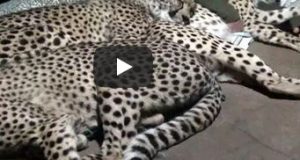 According to Mr. Volker, he was granted special permission to spend his nights with the three cheetahs because he had watched them grow up and built a relationship with them during past volunteering.

“I think it is really cool these cheetahs trust and like me enough to share their most vulnerable time at night to snuggle, purr, and share their warmth and sleep with me. It is an extraordinarily rewarding feeling,” he added.

Saxon is a prolific writer with passion for the unusual. I believe the bizarre world is always exciting so keeping you up to date with such stories is my pleasure
Previous This Horrific Waterfall Accident Will Stun You (Video)
Next Watch Terrifying Video As Humpback Whale Lands On Tourist Boat Injuring 4 Passengers