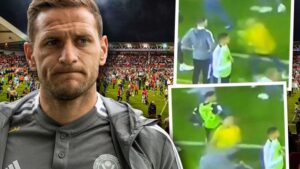 English football momentarily witnessed a show of shame after Sheffield United striker, Billy Sharp was brutally attacked by a pitch-invading Nottingham Forest fan during wild celebrations at the City Ground on Tuesday night, May 17.

After the game, Nottingham Forest fans ran onto the pitch to celebrate their victory on penalties in the Championship play-off semi-final. One of them ran towards Sharp who was standing in the technical area. Footage appears to show Sharp being floored by a headbutt.

The striker was treated on the ground and needed stitches.

A club spokesperson confirmed to media that Sharp was left needing stitches after the incident.

“He’s shook up, bleeding, angry. It’ll be dealt with.”

Forest later put out a statement saying they are “appalled” at the treatment of Sharp, who played for the club on loan in the 2012-13 season.

It read: “Nottingham Forest Football Club are appalled to learn that our former player, Billy Sharp, was assaulted leaving the pitch after tonight’s match at The City Ground.

“The club will work with the authorities to locate the individual in order they are held to account for their actions, which will include a life ban from Nottingham Forest.

“The club would also like to apologise to Billy personally and to Sheffield United Football Club.”

Saxon is a prolific writer with passion for the unusual. I believe the bizarre world is always exciting so keeping you up to date with such stories is my pleasure
Previous Watch: Body Camera Footage Shows US Cops Rescuing Woman Trapped In Sinking Car
Next Watch: 4 Carpet Pythons Spotted In A House In Australia (Viral Video)