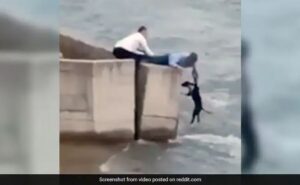 A video has surfaced online showing a man who was said to have skipped a wedding celebrations to rescue a stray dog clinging to the side of an overflowing river.

The video which has amazed the internet shows the dog standing on his legs on what appears to be a concrete base along an overflowing stream.

A few seconds into the clip, a man wearing a formal two-piece suit is seen walking toward the riverside and rescuing the pooch. Another man is also seen joining hands in the mission so that he could pull the “coatless hero” up once he successfully brings the canine to safety.

Shared on Reddit just hours ago, the video has already taken the internet by storm. It has received more than 58,000 upvotes and hundreds of comments. While some internet users said that the interaction between the man and stray dog at the end of the video was their favourite part, others wrote they liked how the pooch ultimately followed the man behind.

“Honestly. This one really warms my heart,” wrote one user. “Some people just know what to do. He’s a coatless hero,” added another. A third user said, “The interaction at the end is my favourite part. A little untrusting back and forth of trying to get the dog to come with him, then just walks away and the dog is close on his heels.”

Saxon is a prolific writer with passion for the unusual. I believe the bizarre world is always exciting so keeping you up to date with such stories is my pleasure
Previous Viral Video: Bengaluru School Girls Rip Each Other’s Hair Out In Vicious Brawl
Next Watch: Dog Helps Monkey Steal A Packet Of Chips From Shop