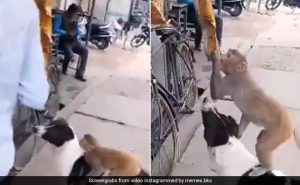 This looks like an impossible partnership you would never have believed if it were not caught on camera.

In case you missed it you can watch it now.

The video is not actually recent as it was originally posted in December last year. Just that it is going viral again.

The video shows the monkey stealing a packet of chips from a shop by standing on the dog’s back. It has been shared by Memes.bks on Instagram with the caption: “Who say monkey and dog are not good friends.”

The video amused viewers, who reacted with hilarious comments about their own friendships.

“After seeing this i remember my friend,” a user commented. “Teamworks,” a second user wrote.

Some of the user comments, like “Parallel universe” took it to another level.

The video has received thousands of likes and views on Instagram since it was posted.

The 🐒 trying to pick up a packet of chips with the help of 🐕 is the cutest thing you will watch today ❣️❣️. #goodmorning #dog #dogs #monkey #monkeys #animal #AnimalLovers #cute #lovable #adorable #friendship #bond #team pic.twitter.com/bkMAEU13NC

You only believe this kind of story when you watch the video to back it up.

Saxon is a prolific writer with passion for the unusual. I believe the bizarre world is always exciting so keeping you up to date with such stories is my pleasure
Previous Viral Video: Man Skips Wedding Celebrations To Rescue Dog Stuck In Overflowing River
Next Viral Video: “Best Squirrel Dad” Talks To 2 Furry Friends