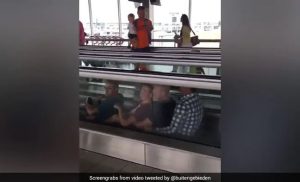 The internet is buzzing over a viral video which shows a group of people rowing on the moving walkway installed at the airport.

The incident happened at Schiphol airport (in Amsterdam), according to Buitengebieden, which shared the video on Twitter. It was done by four men as was shown in the video.

The footage shows the men having fun while rowing in the direction of the autowalk installed at the airport. People passing by are not able to hold back their laughter.

The video has been viewed millions of times since being posted on Saturday.

Twitter users are in stitches and posting hilarious comments on the video.

Meanwhile at the airport.. 😂 pic.twitter.com/3p5JC0Oqhq

“Kept thinking – what happens when they reach the end of the walkway?” a user said, replying to the tweet. “Funny when watching from home but frustrating when you’re there and trying to get by them because you’re running late,” said another.

Replying to Buitengebieden’s tweet, one Twitter user posted a short clip of his son appearing to fly at an airport. The video shows the young boy lays on the handrail of a moving walkway on the airport with theme music of ‘Superman’ playing in the background.

Saxon is a prolific writer with passion for the unusual. I believe the bizarre world is always exciting so keeping you up to date with such stories is my pleasure
Previous South African pastor found guilty of raping 22-year-old man
Next Viral Video Shows 5-Year-Old Boy Playing Mozart Flawlessly