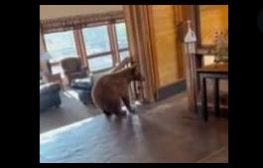 A video showing the chilling moment a bear wondered into an office in Colorado has gone viral online.

A front desk worker at a Colorado condo complex captured video when a bear wandered into the office through an open back door.

Kailee Duryea said the back door had been left open to let the warm breeze inside at The Lodge at Steamboat condo complex in Steamboat Springs and there were some cookies left out on the lobby’s coffee tables.

The cookies apparently caught the attention of a bear that wandered in through the open door.

Duryea called maintenance and filmed video of the bear as she talked on the phone.

The footage shows Duryea yell at the bear to leave, driving the animal toward the closed front door before it reversed direction and strolled past the desk worker to the open back door.

Duryea said the bear did not act aggressively and did not leave behind much of a mess, aside from some cookie crumbs.

Saxon is a prolific writer with passion for the unusual. I believe the bizarre world is always exciting so keeping you up to date with such stories is my pleasure
Previous Woman lives with 400 spiders inside her home, friends abandon her
Next BBC News throws trainee under the bus and apologizes to viewers after caption ‘Manchester United are rubbish’ appears live on air (video)