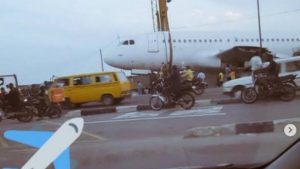 A plane was seen being towed on a busy road in Lagos, Nigeria, after suffering an apparent mishap Tuesday night, according to videos shared on social media, causing miles-long traffic congestion.

The airline, which did not appear marked, was seen on Agege Motor Road near the busy Ikeja road, witnesses said.

It was not immediately clear what happened to the plane, which had damaged wings, as accounts differ about its fate. 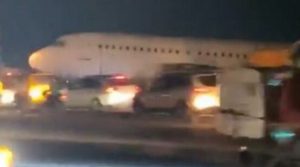 Some of the users who commented on the story said it crash-landed around 8:33 p.m., while others said it was being towed to a repair workshop near the airport.

Meanwhile the Federal Airports Authority of Nigeria (FAAN) denied that there was any plane crash in the city on that day. This was stated on the official twitter handle of FAAN. The statement said:

The Federal Airports Authority of Nigeria would like to inform the general public to disregard the news making the rounds on social media about an alleged crash at Ikeja Airport.
The aircraft was sold by the owner to a buyer, who was taking it to its final destination.
Thank You

It is still not known how the airplane ended up on the road but the video has since gone viral with hilarious reactions from social media users.

Saxon is a prolific writer with passion for the unusual. I believe the bizarre world is always exciting so keeping you up to date with such stories is my pleasure
Previous BBC News throws trainee under the bus and apologizes to viewers after caption ‘Manchester United are rubbish’ appears live on air (video)
Next Junior student dies after she was stabbed in the breast by schoolmate during a scuffle over an alleged boyfriend (video)