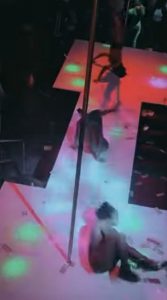 A video has stunned the internet as it shows bizarre moments three strippers in bikinis performed strange dance moves which included teddy bear rolls and headstands as excited guests threw money on them. The video has gone viral on Facebook.

The footage from inside a strip club shows women in bikinis wowing guests by making strange moves around the poles as money is thrown on the stage.

The video shows three dancers on the podium, with two doing teddy bear rolls – one doing it with their left leg behind her head. 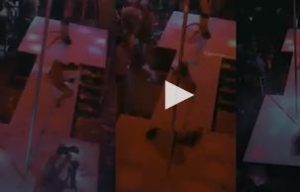 The third decided on a more complicated move as she spun around the pole on her head.

As the girls performed the bizarre moves, huge amounts of money came raining down over them from the crowds that seemed to love the spectacle. Some viewers on social media seemed to love it too.

The clip, which went viral on Facebook with more than 30,000 likes, was shared by Tennessee-based realtor, Sonya Jackson on May 9. 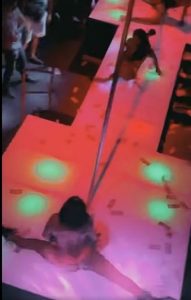 People flocked to the comments in hysterics over the footage as they declared that it was far from what they thought a strip club would be like.

One commenter said: “What’s going on?”

Another wrote: “I’d be taking the money back like 50 did.”

A third added: “We’re not going to the strip club no more.”

(With reports from Daily Star)