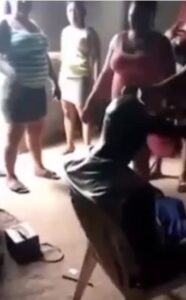 Its either he was trying to impress himself by having more than who could withstand or the money he had played tricks on him. His eventual choice made him go viral for the very wrong reasons.

A man who stormed a hotel to have the fun of his life nearly lost his life after sleeping with three sex workers.

A video of the incident showed the man being helped to a chair by a lady as he couldn’t walk again after the act.

The ladies had to pour water on his head to revive him. 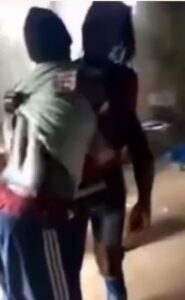 In the video, the man who recorded the incident could be heard speaking in pigeon English, asking the ladies what happened to the man. He was told by one of the ladies that the man slept with three girls after which he broke down.

One of the ladies could be heard asking the man whether he was recording the incident, warning him nor record her but the man denied he was recording, claiming he was only making a call.

There is no indication of where the incident happened but it is suspected that it took place somewhere in Nigeria.

Saxon is a prolific writer with passion for the unusual. I believe the bizarre world is always exciting so keeping you up to date with such stories is my pleasure
Previous “This is irresponsible and nasty”, Truck driver with 33 children from multiple baby mamas is called out as he proudly shows off his kids; he responds (video)
Next Shocking Video: Passengers Cry Out In Terror As Officers Drag Steering Wheel With Bus Driver on High Way