Home / Asia / VIDEO: Shirtless Indian cop suspended for forcing woman to do his body massage to get her son out of jail

VIDEO: Shirtless Indian cop suspended for forcing woman to do his body massage to get her son out of jail 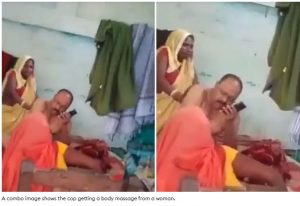 A police man in India has landed in trouble after a viral video showed him getting a body massage from a woman in what looked like his office in a police station.

Though this incident took place a some weeks ago, the village has just surfaced online and anyone who missed it can now watch the shameful incident.

The senior police officer in the Indian state of Bihar got suspended for forcing a woman to do his body massage, local media reported.

According to the media, the officer has been identified as Shashi Bhushan Sinha of a post in Saharsa district of Bihar.

The video shows Sinha enjoying a hot oil massage on his bare body.

Saharsa Superintendent of Police, Lipi Singh has taken cognisance of the matter and suspended the alleged police officer with immediate effect.

Sinha was posted as Sub-Inspector and In-charge of Daghar police post under Nauhatta police station in the district.

Local media reports say that the woman came to the police post and urged Sinha to release her son from the jail.

Sinha took advantage of the situation and asked the poor woman to do mustard oil massage on his body.

The video showed the semi-nude officer with just a towel on his mid-part of the body enjoying the massage. The woman was busy doing the massage on his body and another woman was sitting in front of him.

Sinha was talking to a lawyer and requesting him to arrange for the bail of the woman’s son.

During his interaction with the lawyer, Sinha is heard saying that the woman is poor and cannot pay him money.

The alleged police officer also told the lawyer that he will pay him Rs 10,000, adding that he will send the two women before him with necessary documents for the bail of one of the women’s son.

“After a video went viral on social media, we have set up an inquiry committee headed by a SDPO rank officer. Following his recommendation, we have suspended the alleged officer with immediate effect,” Lipi Singh said.

This incident drew outrage from the public especially social media users that saw the video.

Vanko is a cheerful writer whose enthusiasm for unusual stories is inspiring.
Previous Electrician Cuts Off Entire Village’s Power Supply to Meet Girlfriend in the Dark
Next Delhi lawyer proposes to Ukrainian girlfriend at airport as she flees Kiev to fly to India (Photos)