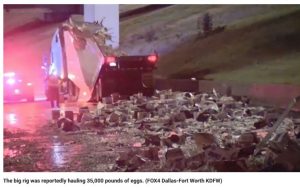 The highway is flooded with raw egg as crew members make effort to clear it.

A tractor-trailer hauling a quarter of a million eggs crashed on a Dallas freeway on Monday, spilling a scrambled mess of raw egg, according to local reports.

The crash took place at about 4 a.m. on I-30 near downtown Dallas, FOX4 Dallas-Fort Worth reported.

The big rig’s trailer, which contained over 35,000 pounds of eggs, was split open when the driver struck the overpass bridge, according to the station.

Photos from the scene show hundreds of cracked eggs and smashed egg containers on the roadway.

The truck driver was not injured in the crash. No other injuries were reported.

Saxon is a prolific writer with passion for the unusual. I believe the bizarre world is always exciting so keeping you up to date with such stories is my pleasure
Previous Sheep Sentenced To Three Years In Jail After Being Convicted Of Killing A Woman
Next Watch: Spanish divers complete dramatic rescue of trapped whale (Video)