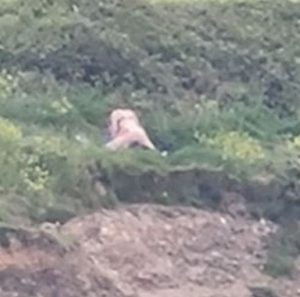 They couldn’t wait to get to a more decent enclosure but had to get it going in public glare. They have gone viral for this.

A raunchy couple desperate to consummate their relationship have been spotted having sex in broad daylight on a cliff ledge opposite the restaurant.

They were seen by restaurant diners who were left shocked when they saw the pair having completely nude as they carried out the action.

The pair were seen at the Swanpool Falmouth in Cornwall, England, on Thursday afternoon, May 26. 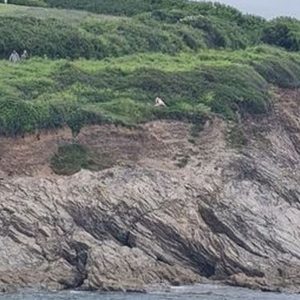 Diners did not waste time to take pictures of this sex act from the Hooked on the Rocks restaurant. The pictures show the couple completely naked and locked in a compromising position as walkers enjoy an afternoon stroll just a few feet away.

The diner who took the snap said: “We noticed a very happy couple at Swanpool Falmouth, on the clifftop.

“We were at Hooked on the Rocks – all the customers were rather shocked and found it hilarious. It must have been the humidity.”

The diner explained that one couple was “a bit annoyed, but the rest of us found it hilarious”.

They added: “An older couple in their 70s were cracking us all up. They couldn’t take their eyes off them. At first sight we thought probably yoga but then my partner zoomed in on her phone and confirmed what we all really thought they were doing.

“My partner was shocked at how long they were going. They were still at it when we left.”

Saxon is a prolific writer with passion for the unusual. I believe the bizarre world is always exciting so keeping you up to date with such stories is my pleasure
Previous Female University Student Depressed As Her S3x Tape is Leaked by ex-boyfriend, She Apologizes to Family and Friends (Graphic Video)
Next English footballer Andy Carroll pictured asleep on a bed with female bar manager just two weeks before his wedding to reality TV star, Billi Mucklow (photos)