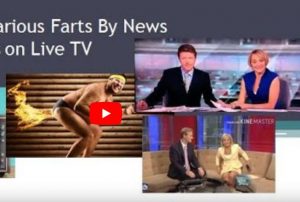 Farting might not be a bad idea at least to give your health some free period. But when it is done in an embarrassing manner, especially in public, the person involved will definitely not like what has happened.

Television presenters and personalities are human. They fart like every other human being. So when you see them on air looking elegant it doesn’t remove the fact that they can make mistakes too. Oftentimes, farting loudly in public is an unintentional act but when it is done on a live television programme it might be seen as hilariously inexcusable. Some television presenters have farted loudly while presenting programmes. In some other cases it was their guests that released the massive fart. But in a number of such cases, no one owns up to the loud fart. Whatever the case may be it is just a hilarious moment to behold. Here’s a collection of top 10 most hilarious loud farts on a live programme either released by the presenter, the guest or no one actually owned up to the fart.

Saxon is a prolific writer with passion for the unusual. I believe the bizarre world is always exciting so keeping you up to date with such stories is my pleasure
Previous Watch: Dramatic Scene New York as Owners Struggle to Keep Dogs at Bay as Rat Causes Commotion at Park
Next Female University Student Depressed As Her S3x Tape is Leaked by ex-boyfriend, She Apologizes to Family and Friends (Graphic Video)