Home / Europe / Confusion as naked people pop up in public all over the UK, See why 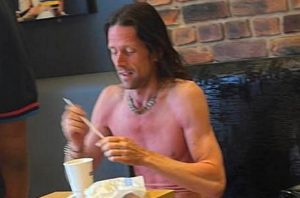 Not that they are doing the right thing because it is unlawful to be naked in public in the United Kingdom, and the police is picked many of them up whenever people reported such sights.

Strangely, UK appears to have experienced a spike in naked people popping up in the most random of places that are nowhere near nudist beaches or a spot of back garden sunbathing.

This is a strange phenomenon because recent uses of the Public Order Act put nudists legally beside sexual exhibitionists, according to the Guardian.

There were several arrests this year among dozens of cases of nude people popping up in streets while others have become the focus of online bemusement.

The incidents caused more confusion as people appeared naked on busy high streets and in restaurants and shops in their birthday suits.

In one of the weirder incidents, in February, pedestrians on a busy London street were shocked to see a naked man streaking down the pavement with three police officers chasing after him, Daily Star reports.

The scenes, captured in the posh neighbourhood of Notting Hill, show the man sprint along the high street with three officers in hot pursuit, in temperatures of around 8C.

In March, customers in a North London branch of Greggs received an unexpected surprise after a man ordered a coffee wearing nothing but shoes and socks.

Police were called to the bakery in Crouch End on March 26 at 10.30am after a naked man refused to leave the premises.

Police later arrested the man on a nearby street after he was earlier spotted wearing Speedos in Crouch End Broadway.

This arrest did not end the incidents of naked people popping up in the UK. Another man, also in March, was spotted cycling naked through the capital in broad daylight wearing nothing but a helmet, socks and trainers.

The rider was seen joining commuters on the capital’s roads at 7am near King’s Cross in central London.

The man, who appears to be in his late 30s, seemed completely unfazed by passing traffic, or the chilly 6C temperatures.

Another man was arrested after walking into a Screwfix store completely naked on the bemused cashier’s first day on the job.

The Sun reported that he calmly waited to collect his online order as he “acted like it was completely normal”.

Builder Izaak Burns, in the shop to buy screws, took a photo. Izaak, 23, said: “This guy walked in and went straight to click and collect. He looked at me and said, ‘All right’ and went to the counter like it was a completely normal thing to do.

“The kid behind the counter was on his first day and was in a state of shock.”

Expert opinion is that life becomes easier and less burdensome when you appear naked in public.

One expert claims that “we shed a weighty burden of anxieties” when naked in public.

“Clothing locks us into a collective unreality that prescribes complex responses to social status, roles and expected behaviours. In shedding our daily ‘uniforms,’ we also shed a weighty burden of anxieties,” wrote K. Bacher.

Saxon is a prolific writer with passion for the unusual. I believe the bizarre world is always exciting so keeping you up to date with such stories is my pleasure
Previous Uttar Pradesh Police arrest Nigerian man for allegedly duping 300 women on pretext of marriage
Next Man charged with touching woman’s breasts without consent