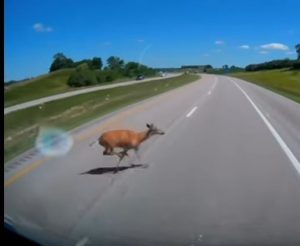 A video which has gone viral online shows dramatic moment a car hit a deer as the animal tried to cross the highway.

The video looks like it was uploaded on YouTube by the driver involved in the crash as the caption of the video says: “We hit a deer today.” 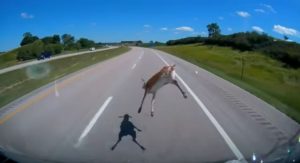 The video shows a car moving on a highway and towards the end of the video a deer jumps onto the highway just in front of the car and was knocked sky high before it fell motionless on the road.

Though the incident happened about 4 months ago, the video is still viral because of the jaw-dropping nature of the accident.

Saxon is a prolific writer with passion for the unusual. I believe the bizarre world is always exciting so keeping you up to date with such stories is my pleasure
Previous Dramatic Video: Watch As Beverly Hills Cop Tackles Thief In the Middle of Street
Next Sad Video: Boy Cries As Meat Sellers Kill His Dog Sold to Them by His Dad (Graphic content)