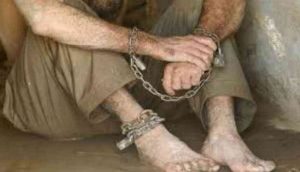 A 22-year-old man in Gujarat, India who had been chained to a tree for eight years is about to taste freedom for the first time.

Mahesh Olakiya who had been chained in Gujarat’s Botad district is said to be down with learning complications at Sarva where he village has spent most of his life chained to a tree for the past eight years.

He is now about to be set free based on the efforts of a social activist.

After Mahesh Olakiya began behaving violently, the man hailing from a family of poverty-stricken slum-dwellers, was chained to a tree without any clothes on his body.

The father of the chained man, identified as Pragji Olakiya said that his mentally unwell son turns violent and starts pelting stones if anybody goes near him. “We are very poor and have no resources to treat him or keep him anywhere. So, we have to keep him chained to a tree,” he added.

Nitin Jani, a social media comedian well-known as Khajubhai on video sharing platform YouTube, not long ago received a message on his social media account regarding this family and he soon decided to visit them.

“We have built a house for the family on the outskirts of the village. We have also provided light and fans and given food and water to Mahesh. He is violent at present. In a day or two, we will take him to some psychiatrist,” the comedian said.

Saxon is a prolific writer with passion for the unusual. I believe the bizarre world is always exciting so keeping you up to date with such stories is my pleasure
Previous Chinese firm dismisses 24-year-old undergraduate because she is ‘too old’
Next Missouri woman arrested after dogs die from being left in car while she ate lunch in Florida