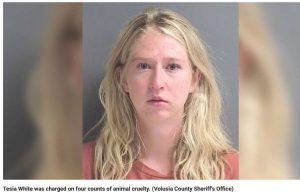 She was eating lunch somewhere else while the dogs she left in the car accidentally turned off the air conditioner and that was tragic.

A Missouri woman visiting Florida was arrested on animal cruelty charges on Thursday after four dogs she left in her vehicle died, according to officials.

Tesia White was apprehended in New Smyrna Beach, Florida after authorities were alerted through a 911 call. Officers were notified that the car was on with the air conditioning running and the windows up while White was eating lunch at a nearby restaurant.

“We have four dogs on the side that were, they accidentally turned the air conditioning off in the car, and they were trapped in a hot car, and now they’re all laying on the side, and none of them are moving, and they’re all like foaming from the mouth,” the caller said, according to FOX 35. 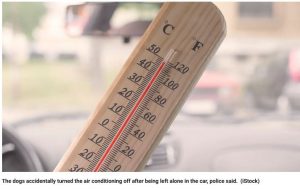 The police report stated that a large puddle of liquid was seen “coming from under the vehicle into the nearby storm drain which appeared that the vehicle was running for a period of time.”

“We leave them in the car all the time with it running and the AC on, but they just absolutely turned it off, this time,” the 911 caller said.

According to police, White allegedly checked on the dogs once during her lunch, but she found them dead when she returned to her car after her lunch about an hour later. Investigators said the temperature outside was about 85 degrees, which, the American Veterinary Association says can result in cars reaching temperatures of about 130 degrees.

White was charged on four counts of animal cruelty and wastaken to the Volusia County jail with a $10,000 bond. A judge said Friday during White’s arraignment that she was not allowed to own any animals while the case moves forward.

Saxon is a prolific writer with passion for the unusual. I believe the bizarre world is always exciting so keeping you up to date with such stories is my pleasure
Previous ‘Violent’ Indian man Chained to tree for 8 years to break ‘free’ finally
Next Staircase collapses as Nigerian politicians climbed podium during the party Presidential primaries (video)