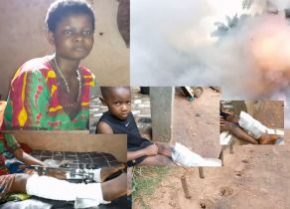 Every business as its own hazards but this one was just terrible.

Canon shots are called Mkponani by Igbo-speaking people of Nigeria. Canon shot is an improvised explosive device (IED) which is made of compressed gun powder and sand in metal jacket. The metal jacket is shaped into a pipe placed in the ground.

Just like in every other business, accidents occur and most times they are unforeseen. One of such work place accidents happened in the canon shots business when a man who was getting ready some canons for a contract he had, encountered a terrible incident that involved his wife and four year old daughter.

This young woman suffered a terrible accident involving canon shots called Mkponani in Igbo language. Her daughter was also involved in the terrible accident. This is one pathetic story that will surely touch you.

Saxon is a prolific writer with passion for the unusual. I believe the bizarre world is always exciting so keeping you up to date with such stories is my pleasure
Previous Watch video: Man falls off his seat while sleeping on local train
Next Adorable video: Toddler plays ukulele while his brother dances to the beat