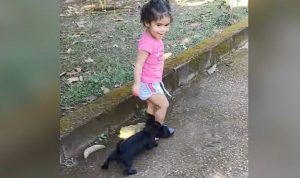 There are times you wonder whether some animals actually think as perfectly as humans especially when it comes to tricks. That’s what happened with the puppy in this video, thinking in a smart way to make away with a little girl’s lollipop.

A video which is currently going viral on social media shows a hilariously cute interaction between a puppy and a small child.

The video which has been posted on ViralHog’s YouTube channel shows a little girl walking on the road enjoying a lollipop along with holding a toy gun. A tiny puppy is also following her around jumping on her and seemingly asking for her attention.

In the video you could see that as the little child bends down to pet the puppy, the lollipop falls out of her hand and is quickly grabbed by the puppy.

The little girl then realizes that the puppy had other plans as it took the lollipop and moves away. Then the child begins to cry as we see the dog merrily prancing away in the background.

The video which was posted on May 26 has had more than 200,000 views with many internet users commenting on the funny yet cute nature of the video.

User Emmit Evans wrote, “Puppy marching off with the candy in the background, too cute and funny!” while Marie M commented saying “That Puppy got that Lollipop and started walking off like he was in a marching band.”

Other users posted funnier responses with some referring to the toy gun the girl had. User Camaro Chevrolet wrote, “She was strapped, she must of been out of ammo”. Another user Richard Golden wrote, “She was about to squeeze that glock.”

Saxon is a prolific writer with passion for the unusual. I believe the bizarre world is always exciting so keeping you up to date with such stories is my pleasure
Previous Mum became pregnant while already pregnant and gives birth to ‘miracle’ twins conceived one week apart
Next Jaw Dropping Video: Man Walks On Plane Wing Overlooking Cliff In Bali (Video)