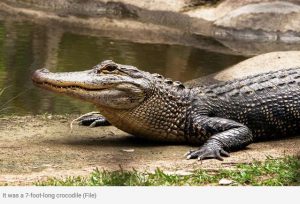 This 14-year-old boy is from a riverside village in Kendrapara district, Odisha State in Eastern India.

Police said he displayed exemplary courage which helped him to survive a crocodile attack after a ten-minute confrontation with the reptile.

What happened was that the boy identified as Om Prakash Sahoo was taking a bath with his friends in Kani river near Araji village under Pattamundai police station jurisdiction when the 7 feet long crocodile suddenly came out from nowhere to drag him. But he fought bravely with the reptile to save his life.

The boy had little time to react because this attack was so sudden. But what the boy did next was very impressive though that was the only option he had to remain alive.

As crocodile pounced on him and ragged him, he came up with a last-ditch effort to escape from the claws of death and punched the animal on the forehead and eye. The option paid off as the reptile released him from its grip, a relative of the survivor said.

Om Prakash was first admitted to the district headquarter hospital at Kendrapara. Later he was shifted to the SCB medical college and hospital at Cuttack. His condition is stated to be stable.

Om Prakash incident was not the first in recent times. It is the third crocodile attack in the past one month in and around Bhitarkanika National Park in Kendrapara district. A 54-year-old Janaki Jena, a woman of the riverside village Jharapada within Bhitarkanika National Park was killed by a crocodile on May 26 when she was washing utensils in the river. A crocodile also killed 40-year-old Shiv Prasad Behera of Nalapai village around Bhitarkanika on May 4 while he was taking a bath in the Brahmani river.

The authorities of Bhitarkanika wildlife sanctuary, which is home to 1,784 adult and juvenile crocodiles, have clamped a three-month-long prohibition on entry of tourists and visitors into the national park from May 1 till July 31.

READ ALSO: Jewish scholar charged with raping seven female followers ‘after convincing them he had special powers that could mend their impurities’

“We have sounded an alert as the breeding season of these reptiles has begun. It’s a precautionary measure to curb man-animal conflict”, said an official.

The department is prioritizing safety of local people. Local residents need to remain watchful and vigilant. People could ensure their own safety by keeping safe distance from crocodile-infested water-bodies, added the official.

Saxon is a prolific writer with passion for the unusual. I believe the bizarre world is always exciting so keeping you up to date with such stories is my pleasure
Previous Watch: Australian Snake Catcher Removes Snake from Electrical Box (Video)
Next Catcher Removes Small-Eyed Snake From Dining Room in Queensland (Video)