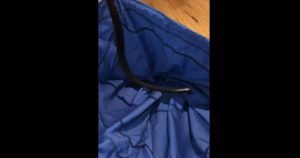 Snake catchers are always ready to respond to calls whenever they are needed and Stuart McKenzie of Sunshine Coast Snake Catchers 24/7 is one very responsive one always with intriguing stories.

He proved this recently when his takeaway pizza was interrupted by a call from a house in Ilkley, a town and civil parish in the City of Bradford in West Yorkshire, Northern England.

A video posted by McKenzie shows him moving containers to reveal the snake which was hiding in the living room of a troubled resident of the town.

The resident of the Ilkley home says in the video, “I think he was sleeping under the door and when I went to take the dog out he bounced up and I think he was as panicked as I was.”

Well, McKenzie did a nice job and the video is captivating.

Saxon is a prolific writer with passion for the unusual. I believe the bizarre world is always exciting so keeping you up to date with such stories is my pleasure
Previous 14-Year-Old Indian Boy Survives Crocodile Attack In Dramatic Way
Next Watch: French Inventor Plunges Into Lake as Flyboard Demonstration Goes Wrong