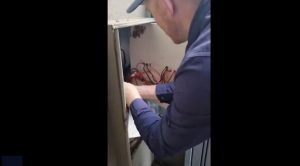 This is one video that will make you appreciate the bravery of snake catchers.

A suspense-filled video shows a snake catcher’s busy day while removing a reptile from an electrical box and another snake in a bird aviary in Tanawha, Queensland, Australia.

Narrating what happened, Stuart McKenzie from Sunshine Coast Snake Catchers 24/7 said he was called to a home on May 5 where he located a snake hiding in an electrical box. 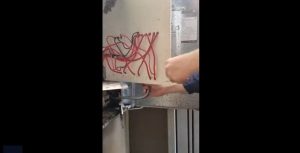 The video shows McKenzie as he carefully removes the lid of the electrical box before retrieving the common tree snake.

“It’s fairly alert, sort of wondering what’s going on, probably because he can’t see the world,” McKenzie said in the video as he holds the snake.

McKenzie was then called to another home to remove a brown tree snake from a bird aviary where the reptile had eaten one of the finches.

“Don’t you dare bite me,” McKenzie says in the clip.

Watching McKenzie do his job was just terrifying but it looked as if it was nothing to him.

Saxon is a prolific writer with passion for the unusual. I believe the bizarre world is always exciting so keeping you up to date with such stories is my pleasure
Previous Dwayne Johnson shares photos of fan who took a cardboard cutout of him to her prom (Photos)
Next 14-Year-Old Indian Boy Survives Crocodile Attack In Dramatic Way