Terrifying Video: Man Takes Nap With 2 Pythons Crawling Over Him 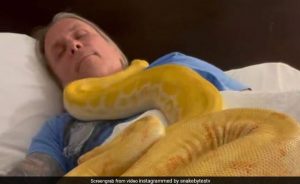 This is one video that will sure terrify many who will see it.

The video which is going viral on social media shows a man taking a nap with two large Burmese pythons (yellow in colour) crawling on his body.

The shocking footage shows the serpents just crawling around without harming him.

The internet is reacting in ways that show unbelievable nature of the video.

“Sometimes after a long day, taking a nap with your favorites is a must! I can’t be the only one,” says the caption of the video posted on Instagram by Snakebytestv.

Many social media users have been left gasping by the video.

“Umm they sizing you up to eat you …. I know you remember Steve Erwin I think that was his name !! The animal man!” said another.

Others simply posted they were “afraid”.

The Instagram handle where the video was posted is run by Brian Barczyk, a Michigan-based wildlife expert. Mr Barczyk is dedicated to educating animal lovers of all kinds about reptiles.

His Instagram bio says, “Traveling the world for animal adventures and daily vlogging it all!”

Saxon is a prolific writer with passion for the unusual. I believe the bizarre world is always exciting so keeping you up to date with such stories is my pleasure
Previous Woman Kicks Husband Out Of Delivery Room After He Called Her A “Hormonal Mess” During Labour
Next Two Ghanaian Teenage Lovers Flogged Publicly For Leaking Their Sex Tape Online (Video, Photo)