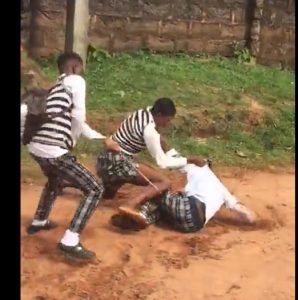 A video has surfaced online showing a female secondary school student beating her male schoolmate during a public fight.

The exact location or reason for the fight cannot yet be ascertained but the female student was however spotted in the video, mercilessly beating her schoolmate and also landing some blows.

There are mixed reactions to this on social media and many think the person recording the fight without making effort to separate them should be punished.

Saxon is a prolific writer with passion for the unusual. I believe the bizarre world is always exciting so keeping you up to date with such stories is my pleasure
Previous Watch as Australian Man Takes Down Aggressive Kangaroo That Tries to Grab His Dog (Viral Video)
Next Mail Error Floods US TV Station’s Office Requesting for Snacks