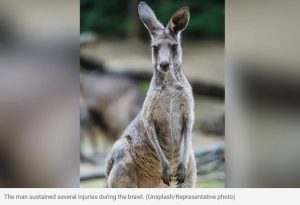 This man is not letting a Kangaroo hurt his dog and what follows next is a viral fight.

An intriguing brawl took place in Australia when a rogue kangaroo chased down a terrified man and attacked him.

A CCTV footage captured the encounter with the animal and it shows the man sprinting away from the irate kangaroo before stumbling and hitting the ground.

Daily Star reports that the man, identified as Cliff Des, is seen running through a neighbourhood in New South Wales as he frantically attempts to escape the crazed animal.

Mr Des then succeeds in fending off the Kangaroo for a couple of seconds with a tree branch, however, moments later, the marsupial pushes him to the ground and begins the assault.

The footage shows the kangaroo is then seen leaping forward before moving back to land several punches on the man. A number of blows are exchanged as Mr Des moves in towards the beast. He attempts to grab the animal, resulting in a WWE-like action from the kangaroo as he throws them to the ground.

Luckily, Mr Des manages to successfully pin the kangaroo to the ground. He is able to suppress the beating as he ends up on top.

Speaking to a local media outlet, Mr Des informed that he had become entangled in the Man vs Roo fracas after witnessing the beast trying to grab his dogs in the front garden. He said that it was a six-foot “mad roo”.

Mr Des disclosed to the media that he sustained injuries during the fight with the kangaroo and this included  being bitten on the finger, scratched on the head, taking a claw “about an inch-and-a-half though his back leg and having his trousers torn “down to the cuff”.

This wasn’t an easy fight for Mr. Des at all but he eventually won.

Saxon is a prolific writer with passion for the unusual. I believe the bizarre world is always exciting so keeping you up to date with such stories is my pleasure
Previous Ohio grandparents arrested for torturing step grandson
Next Viral video shows female secondary school student mercilessly beating her male schoolmate during brutal brawl