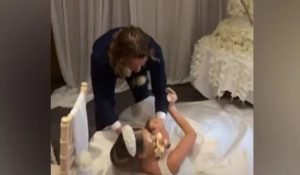 Couples express excitement over their wedding in different ways but this one is very strange though. This particular incident has made this wedding a global one as many users across the world have viewed the video and commented in various ways.

A video making the rounds on the internet shows a moment the groom smashes his wedding cake in the bride’s face out of excitement.

The video begins with the bride seen resisting the groom’s attempt to smear cake on her face. The bride then falls to the ground due to the struggle to defend herself. That was when the groom then finally smashes the cake in her face.

The bride then gets up and runs after the groom who makes an escape.

The video which was shared by ViralHog was captioned, “Husband smashes cake in my face.” According to the post, the incident took place on May 19 in Chester.

There was mixed reaction to the video as some people found the instance unusual and left remarks in the comment section.

“That’s not even funny. The bride was humiliated at her happiest moment. What a spoiler that groom was,” a user wrote.

“I’ll never understand this. Women usually get their makeup and hair done all nice to look like a princess, why would the groom ruin that for her on their special day,” commented another user.

Saxon is a prolific writer with passion for the unusual. I believe the bizarre world is always exciting so keeping you up to date with such stories is my pleasure
Previous Watch as toddler walks around in a mall like an old man (funny video)
Next Man, 4-month-old son shot dead in front of their porch North Carolina home