Home / North America / Watch as Brooklyn Suspect Sneaks Up on Teen Girl, Stabs Her in Back in Broad Daylight

Watch as Brooklyn Suspect Sneaks Up on Teen Girl, Stabs Her in Back in Broad Daylight 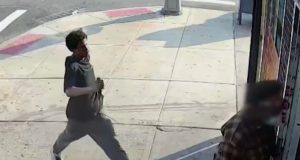 This is a terrifying video showing the moment a suspects snuck up on a teenage girl and stabbed her in the back in what looked like an unprovoked attack.

This chilling incident took place in the last week of May, outside the juice bar along Rutland Road in Brownsville.

NBC New York reports that the victim, Dagean Wilson, is recovering at home, as investigators continue looking for the suspect police believe to be responsible, Lewis Osie.

“I was going to the store to get something and I guess some guy saw me … and wanted to hurt me,” Wilson said. “It felt like a punch, it hurt. I didn’t want to cause any drama so I left.”

The teen said she at no point spoke with the suspect in the unprovoked and random attack.

The victim’s mother, Laronda Hicks, expressed outraged over the attack, and said her daughter didn’t even realize at first that she had been stabbed until she got home.