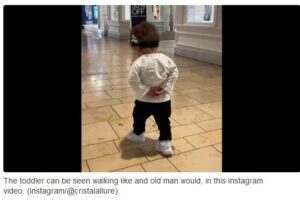 This is a video that has amazed the internet as it provides a lighter mood for viewers. It involves a toddler who probably picked up this habit form an elderly person and decided to practice it in a mall. He has gone viral for this.

The video begins by showing a little kid walking around at a mall and he seems to be enjoying himself in the mall.

He walks like an older person, especially an old man with his arms crossed behind him, looking intently at his surroundings.

“I don’t know who he has been hanging out with but he is off again,” reads part of the text insert towards the latter half of the video.

This video was shared on Instagram and is both hilarious and adorable comes with the caption that reads, “My 15 month old, going on 50!” There is a good chance that this video will leave you giggling by the end of it.

“Oh my word. The boy is deep in thought, what did you say to him? Looks like you mentioned him paying rent,” posted an Instagram user. “Oh no, gotta get all the weight of the silly questions of his back now,” wrote a second.

Another user commented, “He has a lot on his little mind.”

This kid has become an internet sensation as many comments are showing amazement at his act.

Saxon is a prolific writer with passion for the unusual. I believe the bizarre world is always exciting so keeping you up to date with such stories is my pleasure
Previous Superb! 5-Month-Old Holds Plank While Working Out With Mother (Viral video)
Next Viral video: Groom Smashes Wedding Cake In Bride’s Face, See Why