Home / North America / Man’s pen!s almost bitten off as he crashes his car while girlfriend was performing oral sex on him

Man’s pen!s almost bitten off as he crashes his car while girlfriend was performing oral sex on him 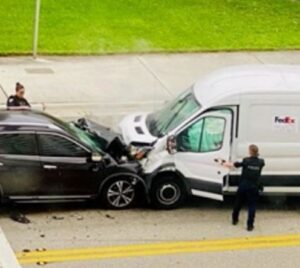 A man has been left with serious bite injuries on his penis after crashing his car while a woman was performing oral sex on him. He was very lucky to still have his manhood intact after the crash.

According to the police, the motorist was receiving oral sex from a woman while he was driving and this caused him to lose control of the wheel.

He crashed into an oncoming FedEx van in Fort Lauderdale, Florida, US.

Though the collision was not life-threatening, the impact of the crash made the female passenger accidentally bite down hard on her lover’s penis. 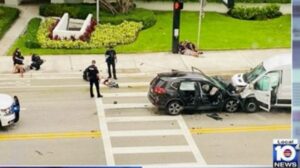 The SUV driver suffered serious bite injuries to his manhood. The female passenger, who was also practically naked in the car, suffered minor injuries.

Fort Lauderdale Fire Rescue told News 10 that a crew was immediately sent to the scene of the head-on collision at North Ocean Boulevard and 19th Street.

The news channel says there were two people inside the FedEx truck whose injuries were minor compared to the naked pair in the SUV.

Fire officials confirmed the woman inside the SUV had been performing oral sex on the male driver, which caused the collision and left him with injuries to his private area.

Saxon is a prolific writer with passion for the unusual. I believe the bizarre world is always exciting so keeping you up to date with such stories is my pleasure
Previous Kim Kardashian says she’d “eat poop every day to look younger”
Next Police hunt for New York thief who specializes in snatching shoes off women’s feet