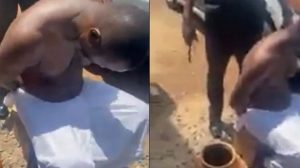 The quest for illicit wealth has pushed a man to an unbelievable act involving the sacrifice of two of his children beginning with his daughter for ritual purposes but the little girl was saved by a kind native doctor supposed to have carried out the ritual.

A video has surfaced on showing the moment the police who were invited by a native doctor, arrived at a scene to arrest a man who wanted to sacrifice his two children for money in Ghana.

The Oyibi-based herbalist, Nana Adu-Boafo invited the police to arrest the father of 12 identified as Evans Oppong.

Local reports say that the suspect picked his daughter from school while classes were still on and headed straight to the herbalist’s house to perform the rituals.

The suspect, who claims to have returned from a sojourn abroad, is said to have visited the home of a herbalist, Nana Adu-Boafo and requested to be made rich.

Oppong also promised to sacrifice his two children for money. Narrating the incident, Boafo who spoke in both Ghanaian and English language said;

“The girl’s father came to see me, he told me he just landed in the country after staying overseas for a while, and it hasn’t been easy for him. He told me he is a father of 12 and is offering two of them for money rituals. He offered me GHS 10,000 and other good surprises when the job is done. Sadly, he had just picked the daughter up during school hours and told her he was going to get her a new dress.

“Yes, I am a herbalist, but I am also a military man. I am very disciplined. I don’t engage in any sinister activities. I want to prove to the world that herbalists are not as evil as they are painted. We are not killers as is portrayed in Nigerian and Ghanaian movies, we are healers. I have the little girl he brought for me to kill.”

The girl looked terrified when she was told what her father planned to do with her and the trauma might be with her for a very long time.

This video has gone viral on various social media platforms causing outrage as expressed in comments by those who have seen it.

Saxon is a prolific writer with passion for the unusual. I believe the bizarre world is always exciting so keeping you up to date with such stories is my pleasure
Previous Russian model falls 80ft to her death from apartment during ‘sex party’ in Thailand
Next Teenager beaten to death during fight outside LeBron James’ I Promise School in Ohio