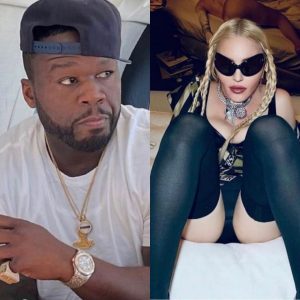 Madonna id 63 years old and 50 cent thinks it’s time for her to chill out on some of her raunchy moves. He passed that message across in a way that has gone viral.

The rapper compared Madonna to an alien after she posted a risqué photo of herself on Instagram.

50 Cent re-posted a picture from Madonna’s IG page where the singer is sitting on the bed with her legs suggestively open while wearing black-colored cat-eye sunglasses.

“Jet-lag,” she captioned the photo along with an airplane emoji, a skull emoji and a sliver heart emoji.

Resharing the photo, 50 Cent wrote: “I hope she didn’t make her kids take this picture. LOL at 63 somebody tell her to chill out please.”

He also shared three photos of aliens alongside the photos of Madonna, to allude that the pop star looks like an extraterrestrial in her suggestive photo. 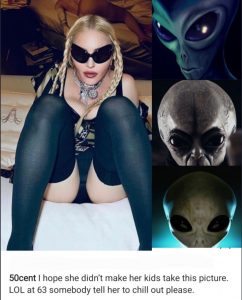 Saxon is a prolific writer with passion for the unusual. I believe the bizarre world is always exciting so keeping you up to date with such stories is my pleasure
Previous Georgia Sonic workers find large snake behind deep fryer
Next Video: Elementary school principal drags special needs student through hallway, gets fired