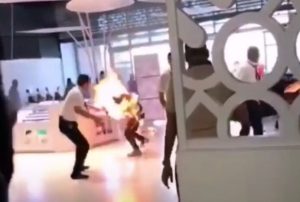 A video has surfaced online showing the moment a young man was gutted by fire after a cell phone he was receiving call on blasted due to excess radiation.

He was also charging the phone using a power bank while making the call.

The video shows the young man shouting for help after the fire gutted his whole as he felt pain.

Reports have it that the man stood on the phone for more than four hours and as a result of the radiation, the phone blasted hence the fire.

People present at the scene tried to help the man quench the fire and bring her out of his pain but all their effort proved futile until one fire expert brought in an extinguisher to quench the fire.

The man is said to have been taken to the hospital and is receiving treatment.

Saxon is a prolific writer with passion for the unusual. I believe the bizarre world is always exciting so keeping you up to date with such stories is my pleasure
Previous Groom’s Father Stops Wedding Reception Because DJ Was Playing Non-Christian Music (Video)
Next Watch as Indian man dances, sings happily with live python tied around his head (Video)