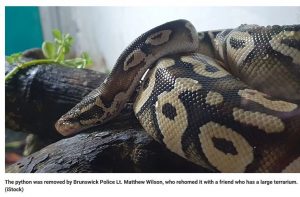 Sonic workers in Brunswick, Georgia, were stunned to see an unexpected customer slithering around the kitchen last month.

The fast food employees arrived at work on May 21 to find a large python behind the deep fryer. They immediately called the Brunswick police and fled the restaurant, The Associated Press reported.

Lt. Matthew Wilson who arrived the scene following the call found the troubled Sonic workers huddled in the parking lot.

Information given about the snake by the workers was different from what officials found at the scene. Though the employees had said the snake was brown with diamonds on its back, Wilson told The Brunswick News that he could immediately tell the snake was a non-venomous ball python and not a rattlesnake.

Wilson removed the snake from the Sonic kitchen and even found it a new home with one of his friends who has a large terrarium.

The python likely slithered into the kitchen through an open back door and found its place behind the fryer to keep warm, Wilson said.

It is unclear where the snake came from, though Wilson said he believes it was a pet that was turned loose by its owner, AP reported.

“It could be somebody just didn’t think through the consequences of a large snake as a pet,” Leonard said. “Some people have regrets later on and just release things. It is definitely irresponsible.”

Saxon is a prolific writer with passion for the unusual. I believe the bizarre world is always exciting so keeping you up to date with such stories is my pleasure
Previous ‘Stranded’ Chinese woman spotted in Kenya begging for fare to go back to her country (photos)
Next 50 Cent mocks Madonna by likening her to an alien over her recent raunchy photo