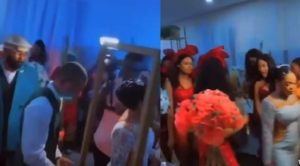 The man insisted that he was in-charge and whatever he said should be done otherwise the event would be brought to an abrupt end.

A father in Nigeria who was probably evangelical has brought his son’s wedding reception to a temporal hold after the Dj played a worldly song which was against his Christian faith.

In a video of the incident which has surfaced online, the man who was pissed could be heard calling for an end to the ceremony after he heard the DJ playing a worldly song instead of a gospel song.

After halting the ceremony, he asked the DJ to play only gospel songs else he will sack all the attendees from the ceremony.

He could be heard in the video stressing that he was in charge of the occasion and expressed disapproval of the secular songs and dance steps by people at the wedding.

The MC eventually directed the DJ to play only Christian or gospel songs.

It was not clear what the reaction of the bride and groom was but the wedding went on after the brief disruption.

Saxon is a prolific writer with passion for the unusual. I believe the bizarre world is always exciting so keeping you up to date with such stories is my pleasure
Previous Cat Congratulated By US University For Attending Every Zoom Lecture With Owner
Next Cell phone blasts in man’s hand, sets him ablaze while receiving call for four hours non-stop (Video)